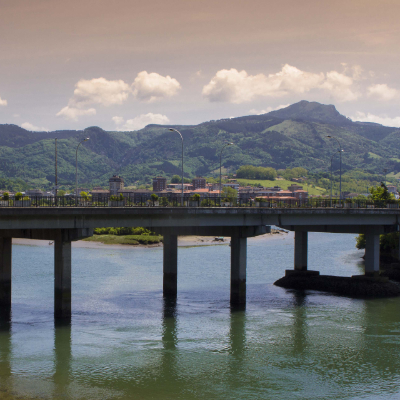 The name Bidasoa given to the river may be related to the ancient Vascon town of Oiasso with the Basque term “bide” (meaning way or route) as a prefix, so the whole name means “route to Oiasso”. This would make sense since the final stretch of the route from Pompaleo (modern-day Pamplona) to Oiasso runs right alongside the river. A second theory says that the second half of the term comes from the Celtish word “asa” or “assa” (meaning water) which would mean Bidasoa, in this case could be taken to mean “route to the water”… in other words the path the Bidasoa river follows to the sea. And finally, some claim the name comes from the latin phrase “Via ad Oessonem” (route to Oiasso). Whatever happens, all three names illustrate the rivers function as a communication path.

The Bidasoa river is 66 km long. Its source is in Astaté, near the village of Erratzu where the Izpegui and Iztauz streams come together. At its head, it is known as the Baztán river with the name changing to Bidasoa after Oronoz-Mugairi.

The Bidasoa reaches the Cantabrian Sea at Txingudi bay next to Cape Higuer between Hendaye and Hondarribia, forming the Chingudi wetlands that include Jaizubia floodplains, Plaiundi. The Bidasoa islands and Fiasan (Pheasant) Island.

After Urdaibai in Bizkaia,  this area is the second largest maritime wetland in the Basque Country. In 1988 Plaiaundi Environmental Park was created within the wetlands, an excellent example of how to restore a dried up degraded wetland to its original state.

Several protected wildlife species can be found in the area including mammals such as European minks, otters and the Pyrenean muskrat; reptiles such as the freshwater turtle and birds including the kingfisher and the dipper. The Bidasoa wetlands have environmental interest because they provide refuge and food to fish, amphibians and migratory birds flying from the north of Europe to the south of the Iberian Peninsula and Africa. The trout and salmon that swim upstream to spawn are two of the Bidasoa’s emblematic species. Other non-native species of flora and fauna to be found in this this natural ecosystem include the Ebro nase, the rainbow trout, the coypu and acacias.

The centre includes a reception to provide tourist information about the three cities. It contains also an exhibition area with several panels related to three themes: the biodiversity of the area, the Eurovélo cycling route and the passage of the Way of St. James through Irun.

The exhibition area reflects the themes related to the Bidasoa river : “A country with the name of a river”, recalling the history of the customs offices and the importance of our strategic location, the Way of St. James as it crosses our region, and the Eurovélo route, which has its information centre at this point on the Baiona-Pamplona axis.

In addition, audiovisual content is presented on the fauna and vegetation of the Bidasoa area.

This Centre is the only one of its kind in the extensive network of cycle routes in the European Union.

Its management has been handed over to Bidasoa Txingudi Cross-border Consortium.

To this end, different activities are organized throughout the year, including a cross-border painting competition “A country with the name of a river” and the drawing competition “Draw the Bidasoa”. The best works are shown every year at the Centre.

Historical exhibitions are also organized here, such as “Memories of the Border” in 2017 and there is a joint project with Mugazabaldu for the rehabilitation of the Behobia Guard Corps from 2018 onwards: mugazabaldu.eu

Access is free of charge. Groups are welcome by appointment.