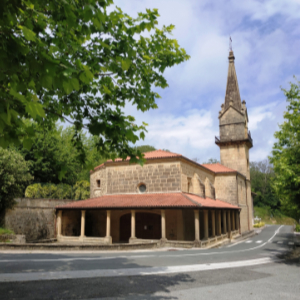 Mount Jaizkibel is located in the flysch type Jaizkibel formation with Ulia and Igeldo; and appeared around 54-45 million years ago. Its crests reaches a height of 545m There are rare fauna and flora species Located parallel to the coast with steep seaward facing slopes on the west side.

Mount Jaizkibel is a key feature of the local landscape. Running parallel to the coastline, at its western end the mountain drops sharply away to the sea, with sheer cliffs standing up to 240 metres in height.

At the eastern end, on the other hand, the terrain is less abrupt and small coves and ravines are formed where a number of small streams flow into the Atlantic. These areas are also a refuge for certain plant species which are extremely rare in the rest of Europe, such as some varieties of tropical ferns.

Several colonies of seagulls, both lesser black-backed gulls and tallow-legged gulls, build their nests in the Jaizkibel cliff faces. Other marine birds, some very rare, such as the storm petrel, have also been spotted in this area, alongside very interesting reptilian species such as Schreiber’s green lizard and the western whip snake.

Avery beautiful stage by the edge of the ocean. Begins by the sea until Cabo Bioznar, rocked by the waves breaking on the cliffs, a gradual climb to the Balcon du Jaizkibel, temporarily turning your back on the ocean. Next, you will follow a nice shoulder of land with your right foot to the ocean and your left towards the inland Basque mountains, before the extraordinary plummet to the harbour in Pasaia.

The Coastal Route which runs along the Guipuzcoan seaboard until going deeper into Biscaya’s western borders, is one of the oldest pilgrimage routes to Compostela, even older than other more well known itineraries. On this route, the Basque country fishing and agricultural regions, as well as urban and rural areas coexist.

Discover the fort and the hermitage of Gudalupe