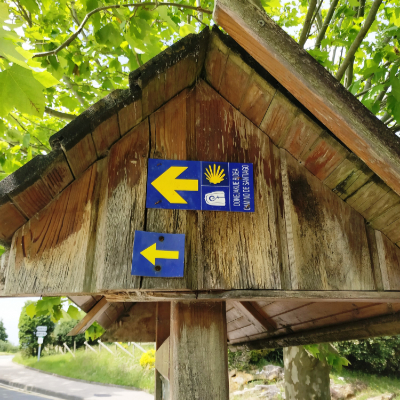 The way of Saint James

Discovering this region as a pilgrim or visitor is to feel the steps which have traced the Way throughout history. The Santiago Way is a well-signposted route so the pilgrim can enjoy what he/she discovers along the way. In town centres the signage is based on a shell and some plaques, whereas along the paths yellow arrows abound

Leaving the Cantabrian Sea behind, this route begins at the mouth of the Bidasoa River where it empties into the bay of Txingudi. From now on, you’ll be passing through towns and villages in the interior of Gipuzkoa. The route traverses a series of river valleys and climbs up relatively small mountains like Santiagomendi, affording fantastic views of the Basque countrysid

Begin at the Santiago bridge over the Bidasoa River. At the large trade fair building, take the real Unión walkway to Santiago street, which passes by Nuestra Señora del Juncal church. From there, walk up to San Juan Harria square, where you’ll see the town hall.

Paseo Colón will link up to the Coastal Route. But for this route, continue walking along the main street (calle Mayor) to Elizatxo avenue toward Landetxa-Ventas. Just before the municipal hostel, turn left ont Belitz street. Follow it up and cross the bridge over the motorway. Pass by several farmhouses and follow a stream, which you’ll soon cross via a small bridge.

Cross the road. Opposite the hotel you’ll see a path that leads down to the bottom of the valley and then up again. Then turn right onto a cement road. After a steep downhill stretch, you’ll reach Elizalde, the main neighbourhood of Oiartzun.

After passing through the centre of Oiartzun, you come to the neighbourhood of Iturriotz. Walk down the main street and continue along a cement road. Turn off onto a trail that leads down to a stream, which you’ll cross via two small bridges. Continue up and over the hill, dropping down to the Sorozarreta farmhouse. Cross a cement road and continue straight on along a dirt road which goes downhill for a short distance and then gains altitude until you reach the Oiartzabal farmhouse.

You’ll see an area used for ‘oxen trials’, a traditional Basque game in which a pair of oxen drag a heavy stone from one side of a square to another. From here, take the dirt road to the Manisene farmhouse. Walk around to the right of a hill called Imia and head up the old road to the hermitage of Santiagomendi, an important landmark on the Way of St James. Perched on a hill, the location offers outstanding views.

Walk down to the car park and turn left onto a narrow road leading to the antenna on the next hill. From here, head downhill, passing by several farmhouses and a convent of Augustine nuns, before continuing down to the town of Astigarraga.

Way of Saint James by the Basque Coast (Hondarribia-Donostia)

The beginning of the Coastal Route could not be more heavily loaded with symbolism: it begins on the Santiago Bridge in Irun, wich crosses the natural frontier of the Bidasoa River, or in Hondarribia, if you wish to cross by boat from Hendaia. This first stage is a perfect synthesis of the constant thar will be found throughout the journey. mountain ranges by the sea, such as Jazkibel or Ulia; river mouths to be crossed, such as the river at Pasaia; paths with excellent views above the coast, fishing villages such a Hondarribia, and ideal finale, Donostia-San Sebastián.

After crossing the bridge we follow the cycle path which flollows the course of the river as far as Santiago Street. We turn next to the church of Nuestra Señora del Juncal and continue up the steps which lead us to the Town Hall square. Having passed this, the road splits into the Coast Road an the Basque Inland Road. We carry on on the right to walk along Paseo Colón and Hondarribia Street towards Mendelu. After crossing Amute Bridge, we use the zebra crossing and after walking alongside the coastal marsh área we follow a local path as far as the chapel of Santiagotxo (5km)

We head towards the old part along Santiago Street and climb up to the Plaza de Armas, in front of the castle. We head down Kale Nagusia and pass through the Santa María gate and carry on to the right until we reach a roundabout next to the humilladero shrine of Santa Engrazia. To its right rise some paved steps which lead to a local path by which we reach the chapel of Santiagotxo (3km)

The Camino continues along a road between farmsteads. Shortly before reaching a private hostel we take the path that ascends towards the Guadalupe chapel with stunning wiews over the Bay of Txingudi. Next to the chapel is the fort of the same name, one of the most beautiful defensive constructions in Gipuzkoa.

We take the woodland track which starts opposite the chapel, and which further on turns to the left to go around the Jaizkibel Mountain on its south face. Although some pilgrims choose to follow this track half way up the slope, the views from the top of Jaizkibel make it well worth the effort to follow the oficial Camino. This sets off with a Sharp ascent, and later links, via the Summit ridge, the towers built during the second Carlist War.

After beginning to lose altitude, we reach a hillock and take the path to the left that descends to the track we had left after passing Guadalupe. An arrow shows the diversión towards the hostel at Pasaia, but we carry on descending via the oficial Camino which leads to Lezo.

Upon our arrival in Lezo, we walk down Auñamendi Street and cross Saldise Square and the road to climb up to Square where the Basilica del Santo Cristo is located, famous for housing a beardless Christ. Continuing up the Main Street we head for Pasai Donibane.

In Pasai Donibane, we follow its picturesque “single Street”, and after passing alongside Victor Hugo’s house (now the tourist information office), we arrive at a humilladero shrine, opposite which we wil catch the ferry which crosses to Pasai San Pedro.

Once we have crossed the bay, we continue to the right towards the mouth of the port to walk past the Albaola Basque Maritime Factory, where you can see, right before your eyes, the construction of a replica of the 16 th century ship, Nao San Juan.

On the entrance esplanade to the lighthouse, a path leads off to the which allows us to see the coast and the old aqueducts, relics of the drinking wáter supply for San Sebastián. After passing a crossroads, at whichi we continue on the left, we reach a local path next to a school, turn right and carry on towards ulia Park. Upon entering the park, we pass on the left the diversion to the youth hostel, and we begin oru descent along the comfortable track and turn bellow the curve in the road, until San Sebastián appears before our eyes. Afterwards, at the first junction, we turn right and go down a steep slope, which takes us to Zurriola beach. After passing the Kursaal building and crossing the Zurriola Bridge, we arrive at Donostia’s Boulevard, the end of this stage.