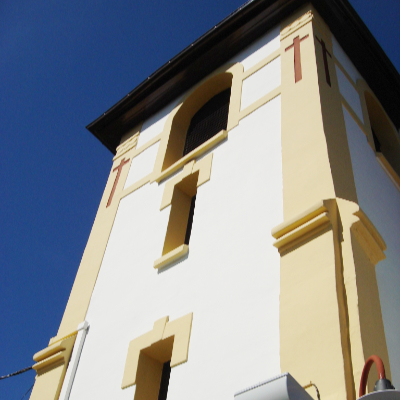 The official name of this 224.8 metre-high mountain, known by the people of Irun as Mount San Marcial, is actually Aldabe. In the 16th century, it was known as La Peña de Aldabe and it was during this period that Don Beltrán de la Cueva, Field Marshal of Gipuzkoa, decided to build a chapel to commemorate the victory over the French at the battle fought on 30 June 1522. De la Cueva initially thought to build a monastery, but the local people wanted a chapel in honour of Saint Marcial, the patron saint of this glorious day, and the mountain has been known by the same name ever since.

The original chapel was destroyed by a fire caused by a lightening bolt which struck the building in 1796. It was rebuilt in 1804 and the new statue dates from this time. On the outside of the building, there is a small monument located against the wall, which contains a list of names of all those who helped build the road up the mountain in 1899.

There is also a carved stone pinnacle with two panels commemorating the San Marcial battles. After numerous renovations, the current tower was built in 1910. The building was later damaged again during the 1936 conflict.

Next to the chapel there is a viewing point which offers marvellous views over the city, Txingudi Bay, Hondarribia, the River Bidasoa and Mount Jaizkibel. The restaurant located beside this viewing point serves typical Basque dishes. A fine example of a 19th century farmhouse which bore the name of the mountain (Aldabe) also used to stand on this site.