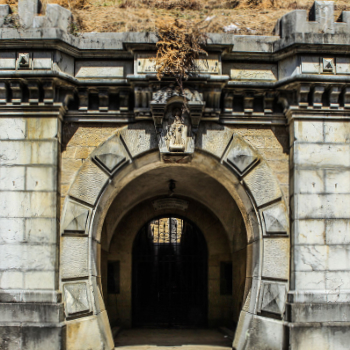 The Fort of Guadalupe

The fort of Guadalupe is one of the most beautiful in Hondarribia. Its strategic location required a strong fortification for the village, and not only in the old part because the wall extends, in the form of multiple forts, to the whole village.

The earliest known reference to this chapel dates from 1526, when six ducats of gold were donated to it by the seafarer Juan Sebastián Elcano.

The chapel has a single nave with a crossing and flat top end. The current building, which was probably constructed to replace an older one dating from, at least, the 16th century, is thought to have been built at the end of the 18th century. One of the most significant and unusual features of the chapel is its contemporary stone spire, built in approximately 1860, although the support elements (corbels and cornices) seem to date from the 17th century.

Inside, two of the side altarpieces are particularly worth noting. These altarpieces originally belonged to the local parish church and are designed in the very late renaissance style. The main altarpiece is baroque.

Following the siege of the town in 1638, one year later, in order to thank the Virgin for having protected them, the inhabitants of Hondarribia pledged to celebrate the victory every year by organising a solemn procession to the chapel on the 8 September, thus changing the date of the main festivals in honour of Our Lady of Guadalupe, which were previously celebrated on 25 March.

Mount Jaizkibel is located in the flysch type Jaizkibel formation with Ulia and Igeldo; and appeared around 54-45 million years ago.