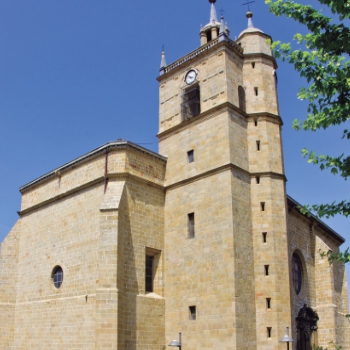 Although work started on Juncal Church in 1508, the building was not finished until 1606, giving rise to a variety of different styles in its design and construction; alongside characteristics typical of the late gothic period, the building also contains elements of the “Basque gothic” style.

From the outside, the church is simply a mass of ashlar stone with heavy buttresses, totally devoid of any decorative elements except for the 17th century baroque entranceway and a number of gothic gargoyles silhouetted against the sky, now difficult to make out following the renovation of the eaves twenty years ago.

The church itself is rectangular in shape, with three naves and a flat apse. The apse area is the oldest part of the church, and contains gothic characters in the columns.

Of the vaults, which rest on classic columns, only those over the apse and the choir still remain, the others having been replaced over the course of the last century. The baroque altarpiece behind the high altar was designed by Bernabé Cordero from Madrid, and the sculptures are the work of Juan Bascardo, a Navarran sculptor, and date from the mid 17th century.

The gilting was not carried out until a century later. Presiding over the altarpiece is a gothic image of the Virgen del Juncal – the oldest of its kind in Gipuzkoa. The church was declared a National Historic-Artistic Monument in June 1973.