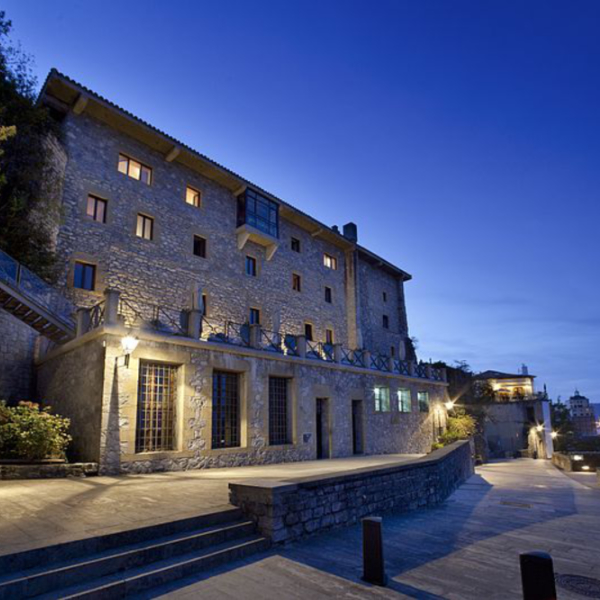 Emperor Charles V’s Castle is a fort built over the remains of a medieval castle, located at the highest point of the hill in the historic quarter, overlooking the mouth of the River Bidasoa.

The original building was constructed by Sancho Abarca of Navarre, although it was later enlarged and fortified in 1190 by another Navarre king, Sancho VII, known as el Fuerte (the Strong). Records of a castle existing on the site have been discovered from the year 1200, when Gipuzkoa was conquered by King Alfonso VIII of Castile. Some centuries later, the Catholic Monarchs renovated the castle, and it was again enlarged during the reign of Charles V.

Today, it is a quadrangular building with robust 2-3-metre walls, notable for its monumental nature, severity and sturdiness. The building was both a castle and a palace. Today, it basically consists of a central construction built during the Middle Ages, which is quadrangular in shape with a central courtyard and remains of turrets on the eastern side. Several extensions have been added to the main constructions, the most significant of which is the main façade, built by Charles V. This very sober façade features the main entranceway, consisting of a small arch simply decorated with an alfiz adorned with balls. The imperial coat of arms, with its two-headed eagle, crowns the whole arrangement.

According to maps dating from 1797, the building originally had six floors with various different rooms for the troops and the guards, as well as storerooms, wardrobes, explosion-proof powder and munitions dumps, dungeons, stables and a powder mixing room, among others. Its stone vaults still support an upper platform or terrace which once contained ten pieces of artillery and, according to plans dating from 1737, was protected by a cover or roof.

The building was purchased by a private citizen for a very small sum. Later, in 1929, it passed into the hands of the Town Council, which purchased it at the insistence of Queen Maria Christina Habsburg-Lothringen, who during a visit to the city in the summer of 1928, was upset by the imminent sale of the property and suggested to the Mayor, Francisco de Sagarzazu, that he acquire it on behalf of the town.

In accordance with an agreement reached by the Town Council on 25 May 1966, Charles V’s Castle once again became the property of the state, and was later restored and refurbished as a tourist hotel or parador (www.parador.es) under the guidelines of the Ministry for Information and Tourism.