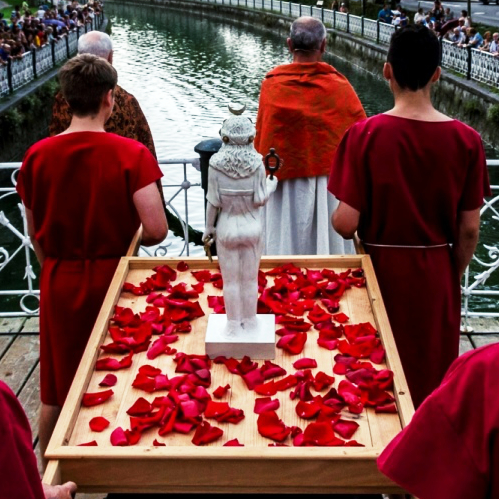 The modern city of Irun was founded on the site of Oiasso, the most important archaeological dig in Guipuzkoa unearthed at the end of the twentieth century.

The name Oiasso is found in classic texts and authors such as Strabo, Pliny and Ptolemy mention this Basque settlement in their writings. Archaeological excavations of recent decades have finally allowed Oiasso to be exactly sited in the old quarter of modern-day Irun.

Today we know that the settlement may well have extended over 15 hectares driven by a large port which was probably most active between 70-200 AD and the silver and copper mines at Aiako Harria .

For one weekend every July the museum and surrounding areas become the scenario of the DIES OiASSONIS Roman Festival where daily life, food, music and theatre of the Roman era are all recreated. This is done by organising workshops, exhibitions, displays and produce sale all in a fun and educational atmosphere. Groups specialising in historical recreation come together for a weekend to take Irun back into its Roman past.

Alongside historical reconstructions, the Roman market winds its way through the streets and the “roman pintxo (nibble) route” reaches out into all the neighbourhoods. Gladiators and chariots appear in the centre of a completely transformed city.

One of the festival’s main activities is Navigium Isidis, a procession dedicated to the goddess Isis which was held in ancient times to celebrate the beginning of the sailing season. Over 200 people take part.