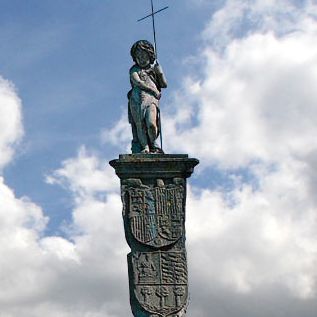 This beautiful classic Town Hall building is located in the Plaza de San Juan Harri and was designed by Felipe Crame, chief engineer of San Sebastián, whose profile is featured in a medallion situated over the lintel of the main entrance. The main façade is built from ashlar stone with bolsters on the ground floor and corners, and is topped with a stone cornice which supports a balustrade divided into two by an enormous limestone coat of arms.

On the ground floor, the main entranceway is covered by a porch with five arches, each topped by its own crowned effigy. On the main floor, five doors crowned with pediments open out onto a large continuous balcony, which is supported by corbels. Inside, one of the most striking features is a large staircase built in 1903 to commemorate the Basque festivals. On the walls of the various municipal rooms and halls hang paintings by Zuloaga, Darío de Regoyos, Salaberría, Salís, Bienabe Artía, Montes Iturrioz, Albizu, Gracenea, Mentxu and Gal, among others.

The San Juan Harri Column stands in the square of the same name. Resting on a stone base, the column itself is made of the same material, with a pedestal and fluted shaft, and is topped by a capital which supports a series of coats of arms, severely disfigured by age and the elements, which may represent the House of Austria, Guipúzcoa and the University of Irun-Uranzu. At the top of the column is a small statue which was replaced in 1850.

The column was declared a Historic-Artistic Monument in February 1964.