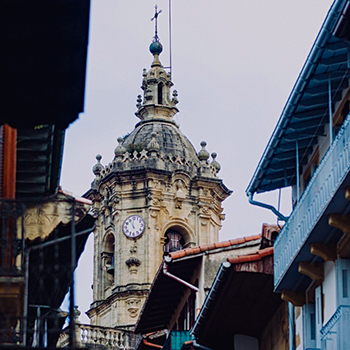 Built over fragments of the old town walls, this church is located in the heart of Hondarribia’s historic quarter. It is gothic in style with both renaissance and baroque touches and its construction contains elements ranging from the 15th to the 18th century. The sacristy was built during the first half of the 17th century, over the old medieval wall. The 18th century baroque belfry is the work of Francisco de Ibero, and was built over the site of an old tower-house.

The church has a Latin cross floor plan with three naves, all at different heights. One of the most salient features of the building is the starred vault underneath the choir, which rests on a beautifully decorated segmental arch featuring a stunning array of religious and heraldic imagery. Special mention should be made of the representation of the Holy Trinity as a three-headed figure carrying an equilateral triangle. According to specialists, this depiction is the only one of its kind on the Iberian Peninsular, and one of the very few existing in Europe.

The church has two entranceways. The main one gives out onto Calle Mayor and was built in 1566. It is a mixture of the gothic and renaissance styles and consists of a large archway decorated with caissons, which frames the doorway. The doorway itself is divided into two parts by a mullion upon which rests a classicist entablature crowned by a pediment whose central image represents Our Lady of the Assumption.

On the northern side is the oldest part of the church, with a simple entranceway consisting of three archivolts which together form a carpanel or multi-centred arch in the flamígero or Elizabethan style. It is here that the original town coat of arms is located. This façade contains many different elements of interest, including the entranceway itself, the shape and design of the windows and the upper cresting.

This double cresting is not fretwork and consists of two separate parts: the gothic part decorated with circles filled with flaming tracery, and on this, a band with vegetable motifs which is clearly later in design and seems to be an attempt to elevate these side walls in order to install a gable roof.

Elements of interest on the south-facing wall include four enormous windows (one of which is not visible) which were added at the beginning of the 20th century, and the fretwork cresting which dates from the late gothic period. Also worth noting is the fragment of archivolt located at the lower end of the western part of this façade. The archivolt was used as construction material and may have belonged to the original church. Another interesting element is the life-size architectural design graffiti located underneath one of the aforementioned windows. The drawings are etched into the stone and represent elements of the cresting and a storey of the belfry cornice.

The medieval wall runs close to the eastern end of the church, and the Paseo de Ronda (elevated walkway) passes through the supports and is perfectly integrated into the architectural design. The robust, defensive nature of the chancel is also striking.

During the 19th and 20th centuries, major changes occurred, including the replacement of the wooden renaissance altarpiece by Joanes de Iriarte (which in turn had replaced a gothic altarpiece made from English alabaster) by a new neoclassic one. Fragments of the former altarpieces are conserved in the sacristy. The sacristy also contains a number of delicate garments, some of which are thought to have been used during the wedding of Princess Maria Theresa of Austria, daughter of Philip IV, to the French king Louis XIV. The display includes silk-embroidered chasubles and capes and richly ornamented tiaras of clearly eastern influence.