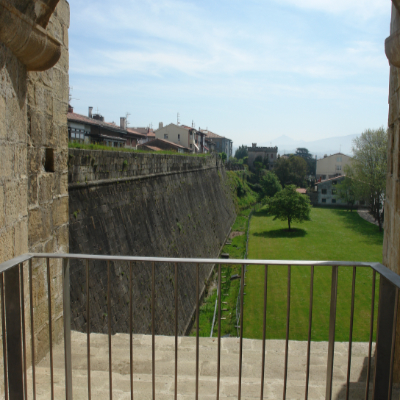 As a medieval town founded in the year 1203, Hondarribia was once surrounded by a defensive wall. The walled precinct was enlarged a number of times over the years as a result of the growth of the town centre. Today, limestone masonry structures still survive which are thought to have once formed part of the old medieval defensive wall. One example are the remains which can be seen outside the parish church.

The major fortification works on the wall date from the end of the 15th and beginning of the 16th century, as evident in the turrets, bulwarks, moats and drawbridges which were built to protect the population living on the headland. Access to the walled precinct was provided by two gateways, the Santa María Gateway and the San Nicolás Gateway. Both were protected by drawbridges.

Santa María Turret, La Reina Bulwark, San Nicolás Bulwark and Santiago Bulwark are all still standing today, unlike La Magdalena Bulwark or Bastion, the remains of which are located underneath the current town centre. From the 17th century onwards, the walled precinct was extended with the construction of the San Nicolás and Guevara ravelins and the counterscarp.

Its strategic location made it suffer intense attacks in the various places. Built in the 16th century, it was partly renovated under the direction of M. Manzano Monís, architect. In the avenue called Murrua we can see the thickness of the walls.